We are in the first quarter of 2018 and deal data is now available through the end of the fourth quarter. In this report, we review our region’s most active industry sectors and give an outlook for 2018.
–
M&A Transaction Report by Sector
– 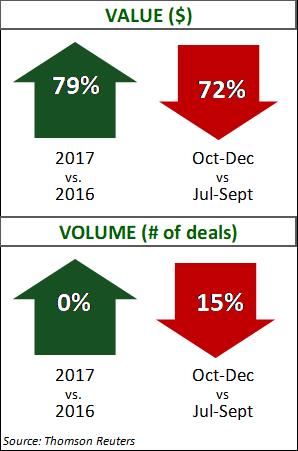 The outlook for 2018 aerospace M&A is strong: increased liquidity from tax reform, the current administration’s push for greater defense spending and the geopolitical environment are among the tailwinds supporting the sector.

II. Chemicals
The US may increasingly become a preferred location for chemical deal activity with US tax reform, a weakening dollar, and increasing oil prices. 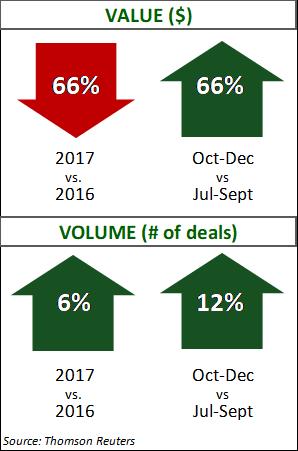 The outlook for 2018 in construction and engineering is positive, fueled by a stronger economy, government deregulation, tax reform, and the opportunity of a new infrastructure bill. 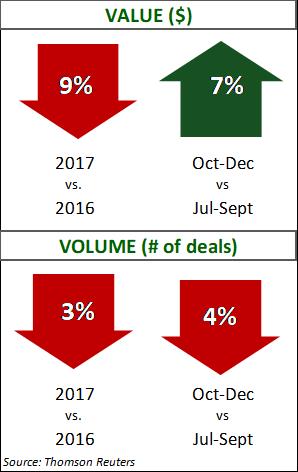 Rising oil prices and U.S. oil production levels have been a strong tailwind for the energy sector in the past quarter.  While the sector faces many complex events with the passage of the Tax Cut and Jobs Act, the reduction in the federal corporate tax rate to 21% and the influx of repatriated cash are expected to increase deal activity in 2018. 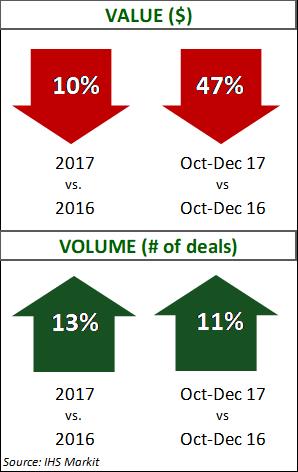 While uncertainty remains with the future of the Affordable Care Act, tax reform, low interest rates, and the possible repatriation of overseas funds will likely lead to increased funding for all healthcare deals in the year ahead. 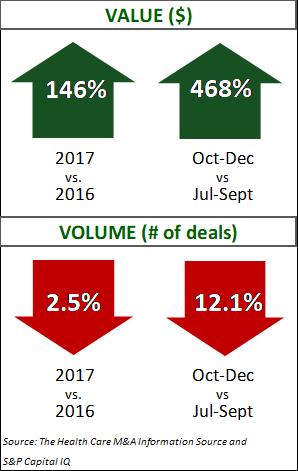 Many of the headwinds the industry faced have dissipated and industry analysts are optimistic about the upcoming year, citing a projected GDP expansion and tax reform. 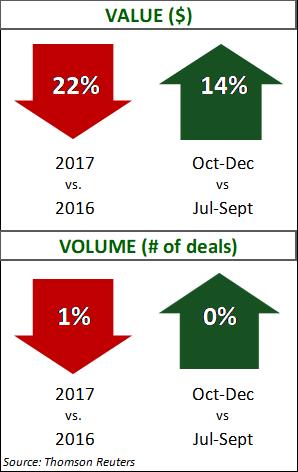 In Q4, 2017, all sectors in the transportation sector, except for rail, posted higher deal value and volume. 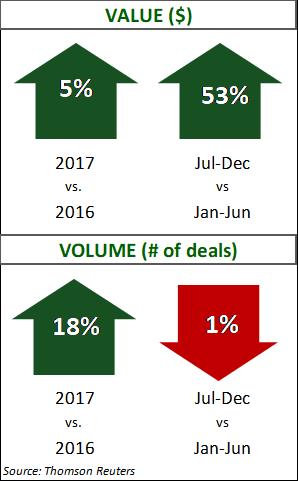 How Can ClearRidge Help You Sell Your Business?
Clients trust ClearRidge to deliver a confidential and discrete preparation and sale process, to remove obstacles to close a transaction and ensure only the most qualified prospective buyers make it to the closing table, with the capital and commitment to close a transaction. The ultimate goal is a higher sale price and preferred deal terms.

ClearRidge is the most active M&A advisory firm in our region and has been recognized for the quality of our work and success at managing and arranging transactions for our clients’ companies. For further information on our team, industry expertise and transactions history, please visit www.ClearRidgeCapital.com.

Note: In the report, you will see that some of the deal data is for larger public companies. The most reliable and timely data tends to be for the larger companies in each industry; however, deal activity of largest corporations is also a good barometer for M&A activity among midsized companies in the same industry.